Me. There are many parts of me that make me who I am.

First off, I adore harmony. This can be a strength and a weakness. Strength, because I confront my problem straight on, until resolved. I am not afraid to confront someone. Weakness, because I don't like to rock the boat when it seems easier to let it be.

Another part of me, is that I adore anything sour... I love shockers, and cry babies - right now. I avoid certain aisles at the grocery store to avoid the pull to the yummy shockers.

I eat, on average, one lemon a day. I love the round lemons - barely any seeds in a round lemon. I eat lemons like someone would eat an orange. I don't like oranges... Had too many bad ones when I was young.

Also, I eat jalapeños out of the jar. I eat a whole jar within two weeks.

I stay positive majority of the time. If there is a bump in the road, I turn the experience into a lesson for my life. I try to learn one new thing a day.

Posted by nurturing life's path at 9:08 PM No comments:

"Letting go doesn't mean that you don't care about someone anymore. It's just realizing that the only person you really have control over is yourself." Deborah Reber
Posted by nurturing life's path at 10:34 PM No comments:

A few definitions from www.thefreedictionary.com on Control:

"1. To exercise authoritative or dominating influence over; direct. See Synonyms at conduct.
2. To adjust to a requirement; regulate: controlled trading on the stock market; controls the flow of water.
3. To hold in restraint; check: struggled to control my temper.
4. To reduce or prevent the spread of: control insects; controlled the fire by dousing it with water."

My Experience With Control:

Who doesn't like to control one's surroundings? I sure do. I love being able to predict the future, I could be prepared...

Over a year ago, my life became out of control. I was spiraling down in to an abyss without a bottom.

I started talking to my self, like a crazy person. I was just repeating myself and could not figure out what it was that was bothering me. Like I was so close to understanding, but just could not grasp the entire thought.

I continued to talk until all of a sudden I stated:


"I can't control what is about to happen."

I gasped at my words.

The weight on my back released.


I can't control what people say or do.


I can control what I say and do.


I can control my reaction to the behavior of others.

Posted by nurturing life's path at 10:24 PM No comments:

The other day, I was listening to a report about a study of infants breathing and the connection to their ability to cope with different situations later in life.  Right when I turned on the report, I heard someone say that the researchers had found that babies heart rate slows when the baby took in a deep breath and quickens when babies breath out.

As I was listening to the explanation, I envisioned someone hyperventilating...  The image flashed across my eyes and I thought no wonder some might faint or have a panic attack.

I was envisioning myself.

I took a deep breath.  My body calmed from my deep breaths.  Amazing that something so basic can have such a big effect.

Today and everyday has been stressful.  There are changes at work.  And a lot of the "What Ifs" are being played out by everyone...

I have learned with my recovery that a much better approach is to breath deep and remember that the moment is the moment, like the concept of One Day at a Time.

My employee stressed two times today, which is not like her.  She stopped breathing for moments when she got to her peak and I look straight at her and told her, breath.  I reminded her it was fixable.  That we have safeguards for this specific reason.  She took a deep breath and her color came back.   And she realized that it would work out just fine.

When I need to remind myself to breath, I remember the moment in the movie, "Ever After" when Drew Barrymore's character states, "Just Breath."  As she is walking into the ball.

A simple reminder for a simple thing to help one calm from a moment of stress: "Just Breath."

Posted by nurturing life's path at 10:06 PM No comments:

Very early on, in my path of recovering from the events from this last year, it was suggested to keep busy or find a hobby.  I thought about this one for a few months. I knew I didn't want to be gone a lot, since our weeks were planned to a tee.  So I asked the question  what can I do inside?

One night I dreamt of being at a craft show, the building was like the inside of the castle of Harry Potter - lots of stairs and landings, which moved.  Every landing had a vendor of different crafts.  When I got to the top I came across a lonely ol' sewing machine.  It was mental and very simple.  I woke from the dream with a very clear answer.

I was going to learn to sew!

I signed up for a sewing class in a town close to us and re-planned our Thursdays.

There were four classes.  First class - I made a bag!  The other ladies laughed so hard when I completed it, since I was jumping around like a little kid and smiling so proudly!

After making the bag, I taught myself how to read and use patterns for clothes.  I made pj pants for me and my family for Christmas. I made a flowy cardigan with fabric I bought for $10! And it was stripes!

I found my hobby to keep me busy.  Something I love to do.  I have pride in my work.  Plus the action of sewing helps me to stop think about everything else.

And gives me a break to allow my mind to heal. 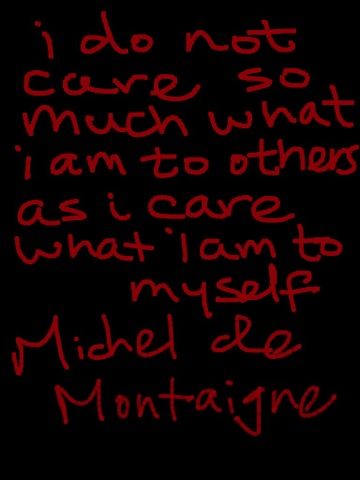 Posted by nurturing life's path at 11:12 PM No comments:

Over the last year my body physically deteriorated due to my stress.  I got sick one week after another.  I ended up with sinus infections almost every time I got sick.

My ears were the first things to go.  They hurt.  They popped.  It felt like I had fluid in my ears at all times.  Finally I went to the doctor during the summer.

He told me that he could tell that my ears were swollen. And then he told me to drink more water...

I looked at him curiously and said, "Huh?  I can clear the swelling in my ears by drinking more water?  That doesn't make any sense?"

Little did I know that if I drank more water, the water would "flush" the extra water in my ears out.

I went home and researched a little on the importance of water and I came across this list and thought I might share my new insight on water from  All About Water:

Posted by nurturing life's path at 7:30 AM No comments:

When I started my new journey in April, my focus has been about me.  All about me.

Selfish, yes and much needed.

Slowly my mind started to heal.  My body began to wake back up and work again.

As I healed physically and mentally, I began to realize the extra boost of healing I would get when I would help someone.  It has become apart of my recovery.

The next person I help, is apart of my new path.

The idea of this blog has come to me over a span of a few months.  I knew I wanted to write what I was learning to help others.   I created the blog and sat on it.  Didn't write a single word....

First off, I am a math person.  Writing has never come easy for me.  Formulating words into a graceful sentence, which makes sense, has always been difficult.  My spelling... well lets just say, I still own a number of dictionaries - one for work, a few for home (gotta have one in every room - right?), one for my car and lastly I have a pocket dictionary for my purse.

Second, I was trying to figure out how I was going to take my experience, while not mentioning the individuals whom are apart of my story, to be utilized to help others.

Finally, on New Years Day it came to me...  Words, health, reflection, clutter, and something that makes me laugh.

So this is the plan:

I am going to (try to) write every day.  Everyday will be a different topic:

These are my own ideas and reflections.  I will use ideas, quotes and references as needed.  My words are my opinion.

My random thought for the first day of "Random Thought Wednesdays:"


To nurture myself again, I feel I must help another.

Posted by nurturing life's path at 9:53 PM No comments:

nurturing life's path
A journey on how to nurture life's path rather than just going thru it. After one very difficult year learning how to move forward with Hope.